Andy is not keen on any type of invasive interaction unless it is on his own terms. Over the years this has presented problems for us as his parents providing basic care. As a per-verbal child Andy has never been able to tell us if he feels unwell or is in pain. Add to this the fact that until fairly recently Andy would not take any medicines and you can glimpse another big problem for parents of children with autism. Similarly we have struggled to keep Andy’s hair neat and tidy. To say that he does not like having his hair cut or shampooed is something of an understatement! We have tried various approaches all with little success. We tried a sympathetic barber who had to give up after literally chasing Andy around the shop! We tried a hairdresser who came to our home but again Andy would not cooperate. Now we try to do it ourselves if the circumstances are favourable and Andy is engrossed in something but it is a very difficult thing to do.
We have attempted various methods of cutting Andy’s finger and toe nails also. As he has got bigger and stronger this has become almost impossible to do without his cooperation. He does tolerate filing his nails but they still require to be cut regularly (especially as Andy likes to explore outside and inevitably gets dirt under his nails.) Jen, like many autism mums, displays versatility and the ability to think outside of the box when looking for solutions for problems around Andy’s care. She now cuts Andy’s nails while he is asleep with the use of my head-torch! (I should have guessed when it disappeared from my rucksack!)
When you consider Andy’s often unkempt hair and discomfort wearing conventional clothes and shoes in addition to his stimming , it is understandable that people are going to stare. In many ways this is a natural reaction when we see things that we do not understand or that fail to fit in with our “norms.” For me as a parent, the crucial part is what happens next. Unhelpful and unsupportive gestures-nasty or mocking comments, disapproving looks- make my heart sink and my hackles rise! A kindly smile, an honest enquiry or a passive response are all fine as far as I am concerned. I am nearly always happy to explain a little about my precious son’s behaviours and condition in an attempt to make his (and others like him) life a bit better.
I.B.A. 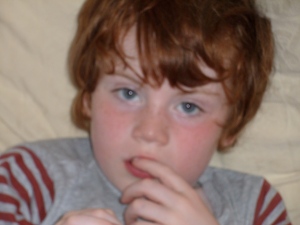